My journey to launching a new course in 30 days

Paul wanted to launch a new online course, and he wanted to do it fast. Here are the strategies he used to go from zero to launch in 30 days.

I outlined, recorded, and launched my third online course, Reinvent, in 30 days. Why 30 days?  I don’t have a special reason, but it felt like the right amount of time where I could focus deeply on creation while not getting lost in the minutiae of perfectionism.

Since I had built multiple courses, I had a good idea of what the process would be like. I knew that the challenge for me would not be creating the content, but overcoming the inevitable resistance and self-doubt of creation.

Here are some of the approaches I took to help me launch my course in and overcome my own fears along the way.

The initial idea behind my online course

In the summer of 2018, I launched an experiment running my first interactive course, ”Solopreneur Shift.” I created a syllabus, a landing page, and found 8 people willing to take a chance on me.

Using Zoom, Slack, and PowerPoint, I pieced together a “digital course experience” and dove in.

I’m not driven like most entrepreneurs. What I found early on in my solopreneur journey was that learning and connection were the “infinite games” I wanted to play. I’ve created a model for these experiments. My goal is always to figure out what to learn or do next:

In addition to coming up with several ideas of how to take online learning to the next level, I experienced something deeper and more exciting.

It was a feeling that online learning had tremendous potential and that it meets a need many adults have but aren’t getting from their jobs: connection and challenge.

Public commitment and raising the stakes

Even with my creation framework, I still faced the same resistance that everyone else does. To battle with this, I looked for ways to “raise the stakes” and get me moving.

I have a number of methods I have found that work, but one I keep coming back to is using public commitments.

Robert Cialdini wrote about why we stick to these public commitments in his famous book Influence in which he talks about the human tendency to be consistent with what we say:

“We all fool ourselves from time to time in order to keep our thoughts and beliefs consistent with what we have already done or decided.”

In this spirit, I decided to post my commitment to a modest following on Twitter and my newsletter.

My second step to raise the stakes was to make a financial investment.

The first investment was to purchase a Podia Shaker Plan based on the recommendation of another course creator, Ryan Kulp (check out his Podia course here, or the story of how he made $20,000 in two weeks of launching his course).

The second was to purchase a new camera and a light.

This was the third online course I was creating, and although my students were happy with videos from other lectures, I wanted to add a little light and soften those mid-thirties wrinkles!

Once I spent the money and made the public commitment, I had to take action.

In addition to announcing the project on Twitter, I reached out to people who were interested in getting early access and wanted to provide feedback on an initial outline of the course.

I used Notion for this as it’s a great way to create content that looks good and let people provide feedback.

For the first 15 days, I made constant updates and implemented feedback into the Notion document before moving to Podia to build the landing pages. For helping with this early process, I offered a discounted rate and got a few sign-ups.

These early sign-ups were the vote of confidence I needed to overcome the early self-doubt of creation. I was no longer creating to create -- I had people that wanted to see me finish.

Many people think you need fancy equipment to produce an online course.

It’s easy to read one article about how you need professional video and then wake up from a three-day YouTube binge as an expert in lighting, photography, and video without any actual progress on your course.

While I chose to buy a fancy light, I easily could have opted into a few more thousand dollars on optimal lighting that the salesman was pushing me to do.

The key for me was to just get started. Here are three things that might help you think about the possibilities of what you can create.

Although many people worry about lighting, I believe that getting good audio is probably the most important thing. Think about one of those podcasts where the audio isn’t as good as usual.

You might still listen, but it bothers you the whole time.

The two mics I used are the Rode SmarlLav+ Mic and the Audio Technica 2100USB, either of which you can get for less than $70 on Amazon. My original plan was to use the Rode microphones with my iPhone 6S, but it didn’t work out as planned:

Here are three things I wish I knew before I started:

I’m a fan of Podia’s layout and course delivery templates because it offers constraints. Without constraints and unlimited HTML options, it’s easy to get lost in creating things that look perfect.

However, many are not aware that there is a lot of hidden potential in Podia’s text boxes.

Some quick digging enabled me to realize that Podia was using OEmbed on the backend, which is essentially a little code that enables all sorts of media apps to be embedded into a simple text box.

I wanted to embed some short clips of podcasts via Soundcloud and also wanted to include YouTube clips that started at specific times. My gut told me this was possible and, after a bit of digging, I was able to find the steps to do it.

Step 1: Find the service’s OEMBED modifiers. You might have to search on Google a bit, but here is SoundCloud, often found on the developer page.

Step 2: Next, experiment with the different attributes you want to adjust. For me, I wanted to tame the SoundCloud’s screen land grab. I found that if I added &maxheight=150 to the end of the Soundcloud link, it sized the player like I wanted.

I’m sure there are countless other adjustments you can make. Another useful one was setting a YouTube start time by adding “?t=811” to the end of the Youtube link.

Note: Make sure you don’t paste the link as an actual link. Unless it is text, it will not work in the Podia player.

Join thousands of creators receiving our weekly articles about launching, growing, and thriving as a creative entrepreneur.

As a former strategy consultant, I am way too reliant on PowerPoint.

However, many people don’t realize that the latest versions of PowerPoint can be extremely useful for recording videos and also integrating different sections. While there are plenty of posts on Podia about other screen recorders to use, I think PowerPoint has become underrated.

Another benefit for creators with PowerPoint is that you can record one slide at a time, meaning you don’t have to shoot uninterrupted videos or spend a lot of time editing, two things I know slow a lot of people down.

First, how do you use PowerPoint to create videos?

Step 2: Find this little icon on the slide show tab

Step 3: Make sure your mic and video are set up correctly in “settings” and hit record.

Step 4: Once you’ve completed recording the slide, it will save your timing and play it back as you recorded it.

Step 5: Once you’ve “recorded” all the slides, you will want to click “file” and then “export” and you can adjust the video options.

I used 720P exports for all my videos, but you can go all the way up to 4K if you are feeling fancy.

Some examples of how I used PowerPoint to make slides:

The gist of it

There are thousands of ways to create a course.

I wanted to share with you some simple tools to dramatically improve your content and lower the friction to getting started.

This isn’t the playbook to make the best course in the world, but it's a pretty damn good first step to take you in that direction. 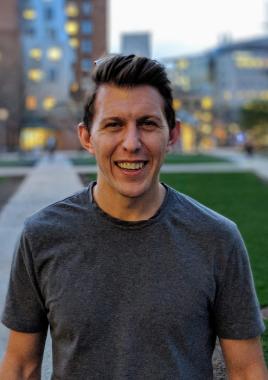 Paul Millerd is the creator of Reinvent, which helps ambitious people reimagine their relationship with work. He also writes about the future of work and the challenges of hacking a living in today’s world as a solopreneur at Boundless.