Are you a creator trying to figure out how to not be nervous for a presentation or webinar? Use these 6 tips to overcome your fear of public speaking.

Fear of public speaking, also known as glossophobia, gets to about one in four people .

I was one of those people once. I can’t tell you how many presentations I spent sweating my way through a blazer. Then, I switched to giving online presentations -- webinars, Zoom meetings, and the like -- and . . .

I still sweated my way through a blazer. Stage fright is rough, whether you’re sitting in a boardroom or behind a computer screen.

But even if you don’t have a phobia-level aversion to public speaking, nerves can do a lot of damage to an otherwise great presentation. This is never truer than in webinars where so much is at stake.

Sell a webinar well and you’ll have leads warm enough to melt butter on.

Fall flat, though, and you’ll be lucky if you drum up enough leads to buy the butter in the first place.

Today, we’re going to help make sure you land in that first category and not the second when hosting a webinar or online meeting with six free, research-backed ways to reduce speaking anxiety.

How to not be nervous as a webinar host: 6 tips and tricks

Tip #1: Practice your presentation with a live audience

There are a few theories about why the fear of public speaking is so common.

Some research relates public-speaking anxiety to weak presentation skills. Other research suggests it happens as a result of bad experiences in the past.

Regardless of the cause, one simple and effective way to cut back on your nervousness is practicing your webinar -- but probably not the way you’re thinking.

Practicing over-and-over again isn’t necessarily correlated to performing better, one study found . The same study discovered that what does help is practicing in front of live audience members, especially new ones.

The more participants were exposed to different audience members, the more their nervousness took a backseat. It didn’t have to be a very large audience, either -- a group of four was enough to work out presenters’ uneasiness.

A group of loyal customers is a great idea for validating your webinar before taking it to a broader audience. Still, it may not be the best course for your first few practice sessions.

Instead, turn to friends and family to work out the worst of your nerves. A local speaking group like Toastmasters International can do wonders, too.

Then, once you have their feedback and a better handle on your presentation, you can pitch it to your most avid customers.

You could provide the webinar as a “thank you” gift for their continued loyalty. Or, if you’re still on the hunt for feedback, you could offer it in exchange for their honest opinions.

(You might want to throw in an exclusive freebie such as an ebook, slide-deck, or relevant template to sweeten the deal. Check out this article on the most popular types of digital downloads if you need some inspiration.)

Of course, there’s nothing wrong with presenting to perfect strangers. It’s actually recommended. You (probably) won’t personally know most of your webinar attendees, so it’s great real-world practice for smoothing out your presentation.

And it’s one that renowned entrepreneur, Tim Ferris , used to prepare for his TED Talk .

For a guy with two TED Talks, the least popular of which has almost 3.8 million views as of the time of writing, he's learned a thing or two about giving great presentations.

And his lesson was this: putting himself in the hot seat early-on allowed him to make mistakes, correct them, and overcome them. That's something you want to do, too, as counter-intuitive as it might sound.

Let me explain in the next tip.

This is the hard truth:

Worrying about mistakes doesn’t mean you’ll make fewer of them.

There’s no apparent relationship between worry and performance. In one study, people with a lot of concern about making a mistake made roughly the same number of missteps as people with relatively little concern.

The important difference between people who worried a lot about their mistakes and those who didn’t was that the former perceived more personal harm from their mistakes.

I.e., they worried more about what their misstep would cost them in the future.

If you want to minimize your worry over mistakes -- and you should, since it doesn’t change how many you might make -- then, as strange as this is going to sound, you need to make mistakes on purpose in your practice rounds.

In a different research study , acting “silly” while practicing their speech in front of others helped students with high public-speaking anxiety shift their perspective about how harshly their mistakes would impact them.

Basically, if you’ve heard that phrase about being your own worst critic, apply its lesson here. Go ahead and forget your lines when you’re giving mock-presentations. Repeat yourself, and look less polished than you want to.

Like the students, you’ll be surprised at how forgiving your audience’s feedback is, and it’ll help you challenge your fears -- which, incidentally, is our next tip.

Tip #3: Find challenges to your speaking anxiety and nervousness

An inoculation message is a powerful thing for soothing presentation nerves.

In an inoculation message, you first learn of and identify a potential threat.

After that, you identify the challenges that may arise because of said threat.

And then, finally, you find facts or workarounds that refute the challenges unearthed in the previous step.

The threat you’re facing is being outed as a fraud and having your business or product launch fall apart.

The specific challenges that come from being outed during your webinar may include less-than-stellar reviews and sinking sales numbers.

So, how to thwart those challenges? If you’ve practiced your webinar in front of test audiences, look back on previous feedback.

Was most of it positive? If so, then why should it be any different this time? (Answer: No reason at all, as long as you’re not making significant, untested changes.)

Research suggests they do. Before a public speaking task, experimental participants who received inoculation messages had lower pre-task anxiety than those who hadn’t received the same.

The participants also said that receiving the inoculation message led them to view their nervousness in a less debilitating way.

All of this is to say that poking holes in your fears could lower your nervousness before an event, even if it feels silly to map them out.

Alternatively, or in combination with mapping them out, try reframing your anxieties. They don’t have to be an inherently bad thing.

Listen, as someone with enough anxiety to keep me up more nights than I want, I know that the palpable dread that comes with it is rarely a good thing at first pass.

But if you trick your brain into looking at it as a positive, it can be.

Stress may not be pleasant, but it can be a force for good .

In one experiment , participants read a short statement about how stress was a natural reaction and that encouraged them to see stress as beneficial.

Participants then read three research summaries talking about the positive outcomes and benefits of stress.

The result was that those same participants later felt better prepared to cope with public speaking stress, especially compared to those who hadn’t read the summaries or attempted to reframe stress as a good thing.

Besides viewing your stress and nervousness as potential benefits to drive you to a better webinar presentation, you can try to look at them as different emotions altogether.

Research has shown that viewing anxiety as excitement can increase feelings of excitement. Excitement, in turn, can improve performance.

The study participants in the above research increased their excitement by either saying “I’m excited” out loud or reading “I am excited” from a prompt, among other methods.

It’s a small touch, but it’s free, easy, and can help, so what’s the harm in trying it?

At worst, you waste a few seconds or minutes, and at best, you find a new way to cope with your public-speaking anxiety.

OK. We’ve talked about specific strategies for confronting your webinar jitters thus far, but for the next two tips, we need to zoom out to see the big picture -- or rather, you need to.

Mindfulness practice isn’t just a great way to practice self-care for entrepreneurs -- it’s also one of the best ways to calm your nerves.

According to the University of California, Berkeley: “ Mindfulness means maintaining a moment-by-moment awareness of our thoughts, feelings, bodily sensations, and surrounding environment, through a gentle, nurturing lens.”

There are many ways to practice mindfulness , such as meditation or body scanning .

There’s a lot of science to back up mindfulness and all of its various methods:

As someone who has greatly benefited from mindfulness practice -- and was supremely skeptical of it in the beginning -- I can’t recommend it enough.

But, even if you don’t opt for mindfulness as a strategy, you can still make use of one of its most basic techniques to catch a breath and get a break from your presentation worries.

Literally, as it were.

Remembering to take deep breaths probably isn’t on the top of your presentation prep list.

But hear me out: just as with mindfulness, there’s a ton of research about how intentional breathing can reduce stress and uplift moods.

Breathing practice over several weeks was linked with lower perceived stress , too.

It doesn’t have to be a strictly long-term commitment to see the benefits, though.

Amy Morin , a psychotherapist, felt nervous before a major presentation she was scheduled to give over Skype. She began taking deeper breaths , and “almost immediately, [her] anxiety melted away”.

Since then, Amy has practiced deep breathing before presentations and interviews to keep herself cool, calm, and collected.

If you want to give it a try yourself, check out these breathing techniques from Headspace and breathing exercises from the University of Michigan to get started.

Otherwise, I’ve always enjoyed the 4-7-8 breathing method . The basics of it are:

And that’s all there is to it. Use this technique before you go on air or whenever you feel your nerves about your speaking skills start to close in. It won’t take but a few seconds of your time slow down and take a deep breath, and, like every technique on this list, can only help.

It’s totally normal to feel nervous when presenting a webinar.

But those nerves don’t have to hold you -- or your webinars and meetings -- back.

Some effective public speaking and presentation anxiety tips include:

We can’t always control our anxieties, but with these tips, you’ll be one step closer to loosening their hold on you before, during, and after your big presentations and webinars.

Good luck, and remember, you got this.

Join thousands of creators receiving our weekly articles about launching, growing, and thriving as a creative entrepreneur. 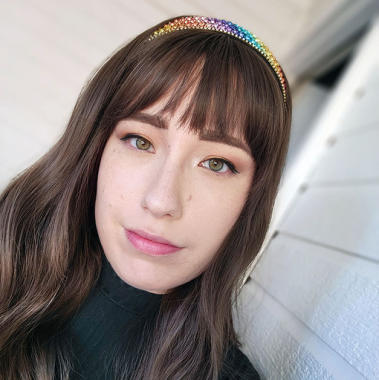 Lauren Cochran is the former Director of Content for Podia. She’s since moved on to leading marketing at PickFu, a do-it-yourself consumer research platform where business owners stop guessing about what customers want and start getting answers. She still drops in to say hello and share cat pictures from time to time.